The team I hate the most. Logically they must be as they destroyed the destiny of the team I loved the most, the 1968 St. Louis Cardinals. If Flood catches that ball in CF, Gibson unquestionably goes down as greater than Koufax, Flood isn't run out of town the next year and doesn't go into a 15 year downward spiral. I'll even irrationally blame them for the Carlton-Wise trade.

Anyways, part of why I love the launch of MLB Network is that MLB has to fill their programming schedule and that means footage they've been hoarding away is finally seeing the light of day.


Which brings us to these clips of the 1968 Detroit Tigers. What is most interesting about these is that they are a) in color and b) aren't kinescopes. In fact, they appear to be sourced from tapes. This are the best quality images I've seen from any season before 1969.

We have three games and it's time for more detective work.

Game 1
This one was rather simple. The footage included the scoreboard, which shows a Yankees player caught in a rundown. The scoreboard tells us that #41 Jake Gibbs batting. Earlier in the clip we see the batter is lefthanded, which fits Gibbs. It is the 6th inning with 2 outs. I could delve further into when and why it could be but honestly, this one is fairly easy.
It's September 17, 1968. 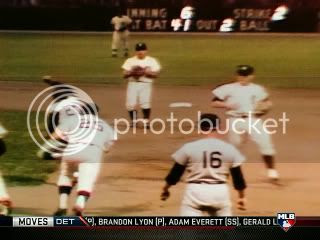 Game 2
This one was more than the last one. We've got a game with the Tigers in which the opponent isn't easily clear. It shows runners at 2nd and 3rd and a left-handed batter up. The left handed batter hits a 3 run HR (despite the audio MLB Network uses in the clip saying the score increases to 2-0. That's simply not possible if you are showing a player hitting a 3-run HR.)

Let's focus on the batter. Left handed hitters for the Tigers that year were: 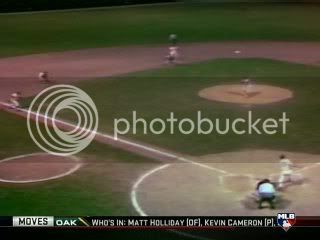 We only get a brief glimpse of the batter's backside, and while we can't make out exactly what the number is, we can see that it is double digits. It also appears to begin with a '2' but we'll leave that out because we can't know for sure. That narrows the list to:

To put it bluntly, there is something else right away you notice about the batter, he's white. Gates Brown and Lenny Green, not so much. That just leaves Norm Cash. I had a sneaking suspicion it was Norm Cash anyways because of the way he swung and ran. 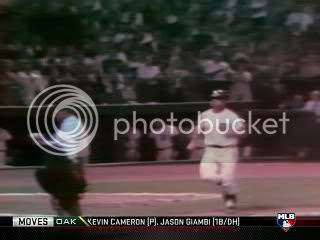 So, now that we know it's Cash and we know it's 1968 (something MLB Network isn't always accurate about either but that is for another blog entry) we can focus on what game it is.

In this game, Norm Cash will need ATLEAST 3 RBIs because despite Ernie Harwell's bad math in the audio a 3-run homerun gives you 3 runs batted in. Norm Cash's game logs from that year show that 6 times that season he had 3 or more RBIs in a game. It also shows that 2 of those games he had 2 homeruns, thus making them impossible.

On August 17th, Cash hit the HR with only 1 on. So the list is down to 3.
With that in mind, the pitcher in the clip is left-handed. The 3 pitchers Cash hit the 3-run HRs off of were Steve Barber - LH, Chuck Dobson - RH and Lee Strange - RH.
We've got the game now: September 16, 1968 vs the Yankees in the 2nd inning. Two on, 1 out and the ball was hit to RF (as the video shows). Just to make sure, let's look at the last piece of data...who was on base and who was up next. 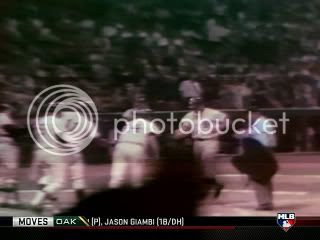 Waiting at homeplate for Cash are #5 - Jim Northrup, #24 - Mickey Stanley and # 11 - Bill Freehan. Freehan has a bat in his hand while Northrup and Stanley follow Cash towards the dugout. The game log shows that both Stanley and Northrup walked to start the 2nd inning, advanced to 2nd and 3rd on a Wild Pitch in an at-bat that Willie Horton struck out. Cash hit the HR and the next batter was Freehan who singled.

He covers first on a groundball to the Second basemen (a right handed player). The opponent is clearly the Twins (the firstbase coach's chest shows that) and the scoreboard shows the Tigers beat the Twins 8-3.

What is odd about this clip is WHERE IS NORM CASH? Cash is seen moments after McLain covers as congratulating him on the victory. Yet the 2B (McAuliffe) clearly is the one that gets the groundball and McLain is the one covering. Strange but true.

Anyways, it checks out and actually the audio on this one is correct: McLain did indeed win his 28th game that day. September 6, 1968. 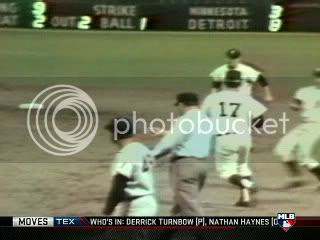 So, why do these video clips exist? Some of them are rather bizarre clips of nothing really important (not milestones) so where did they come from? Does MLB have FULL BROADCASTS or even over 50% broadcasts of these games in question? If they do, please, please, please show them!