Tomorrow at 7pm ET, the Atlanta Braves will be broadcasting on their YouTube and Facebook pages parts of the April 8, 1974 Dodgers/Braves Game or as it is more famously known, the night Hank Aaron broke Babe Ruth's homerun record.

Over the last decade, we have found bits and pieces of additional footage of this game.  First, there were alternate angles and second, we got more of the previous at-bat.

However, tomorrow is something else entirely.  This game has not been shown to the public at-large in nearly 50 years.  The complete broadcast has been lost to time.  There was a home recording by a channel flipper that had a bit of the important points and some later innings.  There is rumored to be an audio recording of the entire TV broadcast.  There is a clip reel somewhere buried in the NBC Vault that holds bits and pieces of the broadcast. 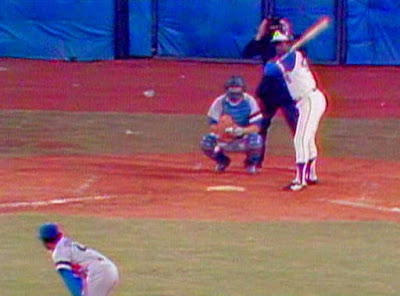 
One of the most iconic moments in baseball history occurred when Hank Aaron hit his 715th home run against Al Downing in the fourth inning of the Braves' 7-4 win over the Dodgers on April 8, 1974. A national television audience heard the call from Vin Scully and caught a glimpse of a young Craig Sager, who was an eager and budding television reporter when he interviewed Aaron after he crossed the plate.

The national television audience did NOT hear Vin Scully's call.  Both he and Milo Hamilton have been immortalized with their calls but both recordings come from the radio.  Curt Gowdy made the television call on NBC, which should be your first clue to that we aren't getting the complete game.

Here is the 2nd (and much clearer hint): According to the guy who actually put together the broadcast (via Behind the Braves podcast), this is a hodge-podged together broadcast.  It picks up around the 21 minute mark.  In it, he has taken bits he has from a random footage reel and put it together to make something presentable.

The 1st inning at-bat may be shown, per the above podcast.

So, enjoy what will be the most complete version we have seen since that original airing 46 years ago but realize going into it, we still are looking for this long lost broadcast.